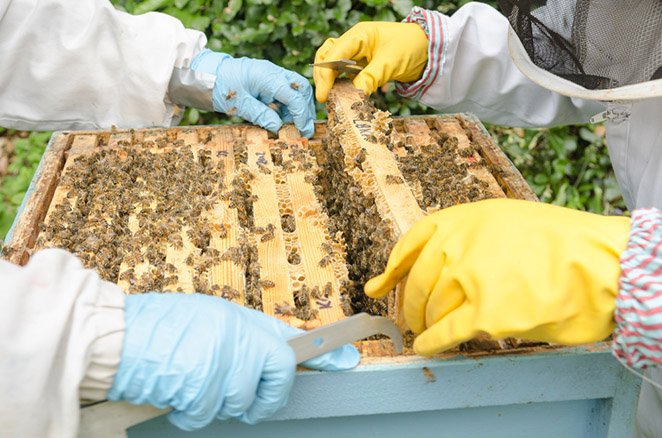 Posted at 21:39h in Other Stories by Rebecca Enderby

This documentary photography project is the beginnings of an exploration into urban bee keeping in London, currently focused on South East London where I live.

Pollinators have been in decline since the 1970’s, primarily due to the intensification of agriculture, which has led to a decline in wild flowers and habitats for pollinators. However pollinator decline still continues despite a decrease in habitat loss. A strong hypothesis for this is the use of pesticides, especially neonicotinoids, the world’s most largely used pesticide. This year, after much campaigning, the EU saw a two-year ban on the use of neonictinoids on crops that attract bees and other pollinators. The lack of an outright ban is in part due to the split opinions of scientists on the impact of these pesticides, with many pointing to the varroa mite, viruses and neglect of hives as triggers for widespread bee decline. It is clear that there are complex and interlinked environmental changes impacting upon these bees, but their decline should be of great concern. Pollinators are essential for shaping our landscape and agriculture; bees are a fundamental part of this. It is estimated that 78% of flowering plants rely on bees and other insects to reproduce and worldwide, out of 100 crop species that provide 90% of the worlds food 70% are pollinated by bees.

Whilst evidence for urban beekeeping within London is very limited there is evidence that dates back to at least the 1930’s, but recent rise in the number of younger urban beekeepers, coupled with increasing concern over the decline in honey bee numbers, conceptualises the practice as part of a 21st century environmental movement. The British Beekeeping Association (BBKA) has reported a sustainable rise in the number of urban beekeepers, with some doing it to green our cities or to produce more locally grown food, others are concerned about the plight of pollinators and are wanting to help. Cities such as London provide good habitats for bees and other pollinating insects. Whilst rural areas, traditionally associated with wildlife, are seeing habitat loss, monocultures and increased pesticide use due to intensified agriculture, cities often offer a variety of green spaces and a lack of pesticides. In British cities such as London there are many avid gardeners, providing a variety of flowering plants for bees and insects. There are now several campaigns promoting urban beekeeping and highlighting the importance of bees and as a result an increasing number of urban beekeepers are ‘emerging’. Interestingly many are women, and are young or middle-aged people working in the city; urban beekeeping is becoming ‘cool’.

My aim is to document and raise awareness about a practice that is in part looking to address the worrying decline of the pollinating honeybee. In addition I am also interested in the process and ‘performance’ of beekeeping, looking at the equipment used and thinking through what ‘makes a beekeeper’. Why are people drawn to keeping bees in the city; how can, or does, beekeeping shape our urban environmental identities? As I continue working on this project I will carry out short interviews, adding to my photographic representations.

For more information on honey-bees and other pollinating insects, on how to make your garden ‘bee friendly’ or to find out about training courses to become a beekeeper, have a look at these sites: