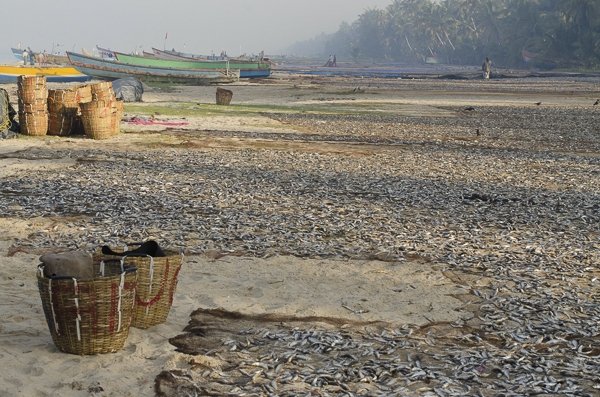 31 Jan Kerela’s fisheries: Times, they are a changing

Posted at 15:44h in Other Stories by Rebecca Enderby

This body of images presents the (early) beginnings of a photography project documenting traditional livelihoods in India that are intrinsically linked with the environment and that are undergoing major changes or shifts.  With these images I hope to capture these ‘endangered’ livelihoods, documenting the transitions and reflecting on the interwoven role of politics, environmental change, technology, economics and education in these complex human-environment interactions.

Traditionally an artisanal activity using manually driven crafts, fishing in the southern Indian state of Kerala has undergone huge transitions since the introduction of trawlers, outward motor boats (OMBs) in select local fisheries and the industrialization and commercialisation of the production processes.

Large-scale commercialized fishing threatens the smaller fishermen, also known as ‘fisherfolk’; whilst a large number of small-scale fishermen now have OMBs, mechanized trawling presents a major threat to fish numbers and fishermen. The annual production of fish in the state has come down by 40,000 tonnes in the last ten years but the volume of fish caught by mechanized trawlers has doubled. Traditional fishing has decreased by nearly 60 per cent in the same period.

The commercial use of bottom-scratching trawlers has nearly destroyed the coral reefs, planktons and the aquatic ecosystem, the breeding grounds of fishes. Fishermen have to go into the deep sea to catch fish such as tuna and shark, which fetch a good price in the international market.  Trawling restrictions have been in place in Kerala since the 1998, when they were first introduced as a conservation measure. They are now an annual occurrence. These restrictions take place during the monsoon, the spawning season for a large variety of fish, particularly shrimp. The ban lasts 47 days, however it is criticised for not being strictly enforced and as ineffective in stopping illegal trawling. Both national and international companies own trawlers; Indian waters are an increasing source of fish for the Norwegian market.

Small-scale fishing in Kerala proudly persists, and whilst fishing won’t completely stop, it will change; how and by whom fish are caught will shift dramatically. The consequences will be broad, varied and complicated, and not just for the people, but also for the fish themselves.